Sisters Of The Valley in Southampton! 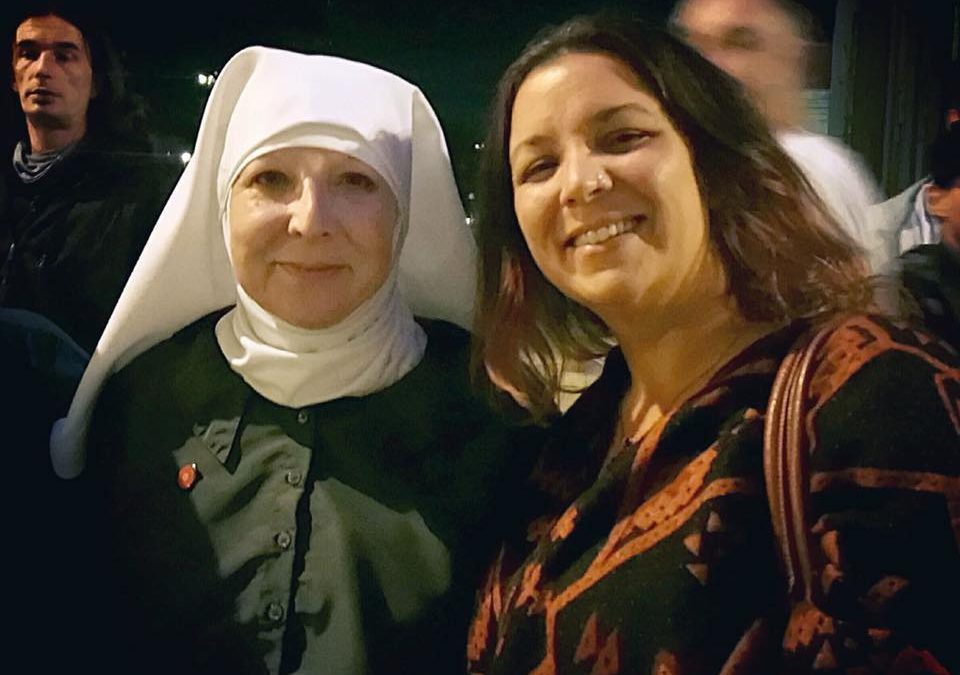 Last Wednesday night, I was fortunate enough to meet Sister Kate from the Sisters of the Valley. We also met Brother Matt (SOTV UK) the man responsible for bringing the Sisters to Southampton.

Seeing the weed nuns in my local city was a bit of a dream come true. I’d been following them on Facebook for a couple of years. To see that they had a Brother in Southampton was a bit strange and also very exciting. Furthermore, to hear the news that they were coming to the UK and having a meet and greet was the best news ever…

The venue was ok, the lighting was terrible and almost unbearable at times, but I wasn’t going to miss a second. The nuns came on stage and started the evening with the trailer for their film Breaking Habits. It was first shown at the Cannes Film Festival 2018 and will be out in 2019.

How did it start? 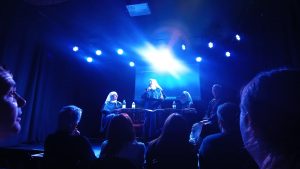 Sister Kate, the founder of the Sisters of the Valley, began telling us the story of how it all started. How once upon a time she was a business analyst making lots of money for other people and herself. She was a millionaire at the top of her game. Then her marriage broke down and her husband took the lot. As a result, this left her penniless with three children to look after.

She began working with the disabled and dying. Bringing them cannabis, food parcels and generally trying to make their lives easier. Consequently, she got involved with the Occupy movements and rallies and at the same time, in protest, she wore a nuns outfit to the rallies. Sister Kate was asking, where is the church? Where are the nuns? Why are they not helping the sick and dying? She soon found out that the average age of a catholic nun was 78, they were a dying breed, furthermore the priests were all caught up in paedophile lawsuits and were unable to help the poorest of the region.

Rejected by her family.

She had moved in with her brother and had started to explore CBD and wanted to make products from it. This meant approaching the black market growers. They couldn’t understand why she’d want to grow weed that didn’t get you high. They allowed her a small section of their space to grow CBD rich cannabis. She had to guard the plot and one night got shot at by thieves trying to steal the crop. She quickly realised that something else had to be done. In contrast, her brother, upset by her choices and plans, evicted her from their home. He kept all her possessions. Her family turned their back on her and she found herself alone again.

Meanwhile, to add to the crazy world she found herself in, US Congress declared pizza was a vegetable. This was in a bid to increase healthy eating in schools. As a result of the ridiculousness surrounding her, Sister Kate declared herself a nun. She knew she had to do something radical. Why not create her own spiritual movement? Why can’t nuns grow weed, make money and help the poorest in society?

Sister Kate found other like minded strong women. They were also happy to face the criticisms and build on the work she had started. She named the Sisterhood after their Central Valley location in California. The Sisters of the Valley became a group of Beguine revivalist nuns. They are not affiliated with any religion. She ended up with a one acre plot in Merced, California. It’s illegal to grow cannabis without a permit in that county. The government won’t grant them a license but they also haven’t been shut down. Consequently, they walk a middle path, never quite knowing what will happen. They have received abuse from the local police. The Sisters never know if their plants will one day be ripped out of the earth in front of them. Yet still they continue.

Sister Kate took her idea of a new spirituality and business model to local universities. She wanted to see if young women would embrace these ideas. The overwhelming response was yes. In a place where poverty was high and opportunities low, the women were open to this way of life. They would be happy to join up, if it meant a solid income, a home, good food, career progression and holidays.

Sisterhoods all around the world.

At this present time, there are sisterhoods beginning to form in other countries. Canada, New Zealand, Portugal and the UK. Sister Kate wants to see women growing CBD cannabis and making medicine all around the world. Grown on local soil, low carbon footprint and no money going to customs. Her message to everyone is, if you want to be a part, be a part. Make yourself known, work out how to do it in your country, make contact and bring your skills to the table. This is an evolving movement that is more than Sister Kate’s crazy ideas. It’s a movement that anyone with the bottle, knowledge, time, need, business skills and motivation can be a part of. The Sisters are always looking at ways to make it grow. As a result, they are open to suggestions and want people to take the founding principles and run with it.

But is it a religion?

No. The spiritual aspects of the sisterhood make Mother Earth central to their beliefs. They grow and harvest with the moon, as it was hundreds of years ago before modern religions took hold. The Sisters hold rituals and blessings for the plants. Local Native American tribes support what the Sisters are doing. The tribes shared ancient knowledge and ceremonial customs with the Sisters. This connects them deep into the land and traditional ways. The Sisters were once invited to a traditional Native American gathering. Held at the top of a mountain, this gathering brings 60 tribes together in ritual and ceremony.

While there, Sister Kate spoke to the tribal female elders. She asked who they were passing their knowledge onto. They said that because the modern women were not following a spiritual path, they didn’t want to pass on their knowledge. They would rather take it to the grave! The modern women didn’t follow the Red Road. Sister Kate, being pretty fearless, said she thought that was ridiculous! she proposed a Pink Road to bring this knowledge to the modern women. The elders were open to that and passed on some of their sacred knowledge. There is a saying/prophecy that the world will be saved by western women. The elders could see the benefits in this exchange. Sister Kate now keeps those traditions alive and teaches others who work with her.

The healing benefits of CBD Cannabis.

Sister Kate is kick ass. She’s radical. She can see what we need to do to challenge authority and she’s not afraid to do it. The laws and views on cannabis are changing but it takes people to make a stand. Challenging the ridiculous laws that are still in place is a start. It is illegal to grow cannabis that contains THC (the psychoactive part that gets you high). Yet, growing CBD rich cannabis that doesn’t get you high is viewed the same. It makes no sense… above all things CBD cannabis is a herbal medicine that can help a lot of people.

They have seen brain tumours disappear and cancers vanish. Eyesight has improved and patients are able to eat or walk again. Relief from pain and management of chronic conditions are all possible with CBD. The science confirms it, yet we still find ourselves walking on the wrong side of the law to grow, make or buy this medicine. 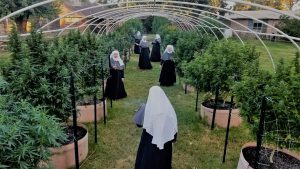 Honouring our ancestors and ancient traditions while empowering women.

Sister Kate lets the media in, she lets Hollywood in, she says she is not above being a ‘media whore’ (her words). Above all things, they need to get the message out there. They need to catch the attention of the masses, hence the controversy. Why shouldn’t women run for positions of power and own our own businesses, land and properties? Why shouldn’t women be spiritual and wealthy? That needs to happen for us to see the shift we need in the world. This lady will do whatever it takes to get the medicine to the people and that can only be respected and applauded.

I’m sure everyone left that room feeling inspired and empowered. I know I did. I’d already told my family that I’d love to be a weed nun one day. As a result of meeting the sisters and hearing their story this was confirmed. Hemp/Cannabis can save the planet. As a result of farming cannabis, not only can we make powerful and safe medicines, we can make fabric, biodegradable plastic and fuel…  Hemp cleanses the air and reconditions the soil where it’s grown therefore It could be a life saver on so many levels. The time is coming. Things are changing. For this mission to continue we need more people believing. We need more people working towards a better future for our children. We need people like the Sisters. People who are willing to put themselves out there and be pioneers of a new and better future.

Finally, If you want to help but don’t know where to start, Sister Kate encourages everyone to support their local cannabis communities. End the stigma of cannabis use and come out of the closet. Sooner or later, cannabis regulations will change and whenever that happens we need to be ready. In the meantime, share links, click like on Facebook, go and watch the movie when it comes out. If you feel drawn to join the Sisters of the Valley, get in contact and let them know. In the long run, all the support will help this movement grow and ultimately will enable the change we need to see in the world.

This site uses Akismet to reduce spam. Learn how your comment data is processed.

We use cookies to ensure that we give you the best experience on our website. If you continue to use this site we will assume that you are happy with it.OkNoRead more
Revoke Cookies